Discussion of adventures old and new of the 73rd most popular superhero of the 20th Century!!

You are not connected. Please login or register 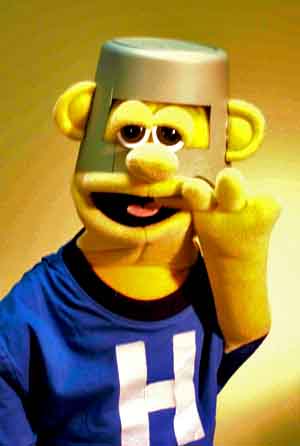 In 1971, three years after the premier of Sesame Street, a controversy was brewing. Some educators and Baptists felt that Sesame Street was confusing to children living outside of urban areas. The lack of picket fences, trees, and cows was cited. Other concerns arose over the title, the complexity of the preschool curriculum, and very few references to Jesus. A leader of one group, Reverend Jimmy Bob commented about, "The cast being so full of 'coloured folk.'" When later confronted over his remarks he claimed he meant the puppets were Yellow, Blue, Red and Green.

Bending to pressure, a PBS affiliate in Arkansas produced a pilot entitled GOD FEARING DECENT AMERICAN STREET which was promptly rejected by the genial Henson.

Eventually DECENT AMERICAN STREET was re-named and released on tape in the late 70's as GOD-FEARING PUPPET TOWN. Hoverboy plays a small part in the show, essentially replacing the Sesame Street Super-Grover segments. Even if the show had gone ahead, Hoverboy would have been dropped. Henson hated Hoverboy after seeing a few episodes of GAY CAVALCADE, and the Muppet creative team argued having a hand puppet hover was impossible. There was talk of replacing Hoverboy with a marionette, but the hovering issue was never resolved, despite two fist fights at the PBS station.

Posts : 1
Join date : 2010-03-05
This looks like its gonna get hairy! Or at least fluffy from all the puppet stuffing flying around! I for one welcome more puppet TV shows!